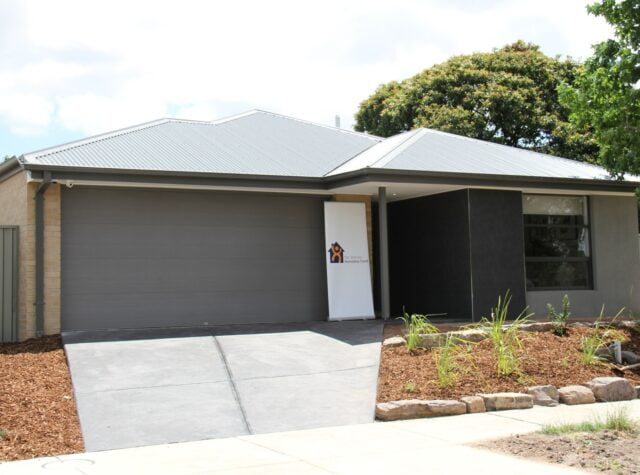 Founded in the International Year of Shelter for the Homeless, our charity set out with a clear mission -To provide transitional and long-term accommodation for women and children escaping family violence.

Fairhaven Homes was delighted to support the fantastic and tireless work of the Victorian Homeless Fund, which exists to relieve and prevent homelessness in Victoria.

We jumped at the chance to participate in the Keith Robinson House project. The Fairhaven Homes team built an inspiring home to emulate the inspiration of Keith Robinson, who has spent a lifetime relieving homelessness by helping people into homes and is considered a founding father of the Housing Industry Association (HIA).

Our No Reserve House & Land Charity Auction was a huge success in 2019 and Maddies Vision was blown away by the six-figure sum achieved at the auction in Point Cook that will help fund research into bone marrow failure syndrome.

Bidding for the four-bedroom Fairhaven house at 12 Joyce St started at $400,000, before a local couple secured the keys for $736,000 after competitive bidding at the no reserve auction.

Proceeds from the four-bedroom fully-furnished house and land package in Satterley’s Upper Point Cook Estate generously donated by Fairhaven Homes and built by an army of tradesmen and suppliers will go towards research into Bone Marrow failure on behalf of Maddie Riewoldt’s Vision.

Make your home journey a reality with Fairhaven Homes.
Enquire with one of our New Home Consultants or call us on: